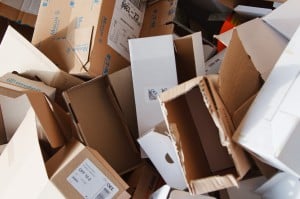 I recently had a number of large packages shipped to me by freight. Since the packages were coming on a semi-truck, I decided to have them shipped to a nearby commercial building and avoid the hassle of a huge truck navigating the extremely narrow streets of my residential address. I cleared this with the shipping company, and they assured me it wouldn’t be a problem and was something they actually do often. They just needed me to receive the package in person. It would be arriving on Friday afternoon, and they would call me a half hour before its arrival.

Friday afternoon comes, and I get a voice mail on my phone. It’s the driver. He says he’s been waiting for me at the building, and now he’s leaving.

I call the shipping company and ask to speak with the woman I placed the order with. I explain, albeit frustrated, what just happened. She immediately gets defensive. “Well, it’s not my fault,” she says, “I noted that you were to be called 30 minutes prior to delivery on the driver’s sheet. Whether or not he decided to call beforehand is his problem.”

Before I could unleash my scathing reply, she said, “Let me transfer you to dispatch.”

After being transferred to dispatch unsuccessfully three separate times, the woman says she’ll have to call me back. Click.

Ten minutes later, I get a call from someone who I can only assume is a manager of some kind. He explains that the driver is now on his way. He also mentions that the driver attempted to call me multiple times before he arrived the first time. I ask why he didn’t leave a message after the first attempt. The manager continues to defend his driver and company.

I arrive at the office building and meet the driver. He says he tried to call and mentions that he was on his way home when he had to turn around and come here. I help him unload. He asks me to verify and sign for the packages–oh, and that he’s ready to go home. I sign, and send him on his way.

I’m a believer in the popular business mantra “the customer is always right.” The company I dealt with certainly doesn’t live by this adage. Instead, its employees are too busy trying to justify their actions and cover their own you-know-whats. I talked with three different people during this experience. None of them were pleasant. Not one of them apologized. Not one of them assured me the situation would be resolved. No one accepted blame. They all had excuses.

And here’s the twist. In this particular situation, they were right. It was all my fault. What I failed to mention earlier is that my phone gets terrible reception at home, and I hadn’t been paying attention to the clock. When I finally got around to checking my phone, sure enough, there were four missed calls. It was my fault. I was wrong. But that’s not the point!

Even though I was in the wrong, when I call customer service, I don’t want that thrown in my face. All I want is for someone to say that they’re sorry and going to do everything they can to try and resolve the issue. Hearing those things in some form would have completely transformed my experience with this shipping company. Instead, they missed an opportunity to make me feel valued as a customer.

Fortunately, at MyBinding.com, we value our customers. We hope this truth is not only reflected in our words but our actions as well. Just check out our Customer Satisfaction Guarantee. If you ever have a need or issue that arises, we encourage you to contact us directly. We will do everything we can to accommodate you. We won’t blame you or make you feel responsible for mistakes. Your business is important to us, and we will do what is necessary to prove it.

By the way, I opened everything after the driver left. Three things were damaged beyond use. Needless to say, if I have a choice, I’m never using or recommending that company again.